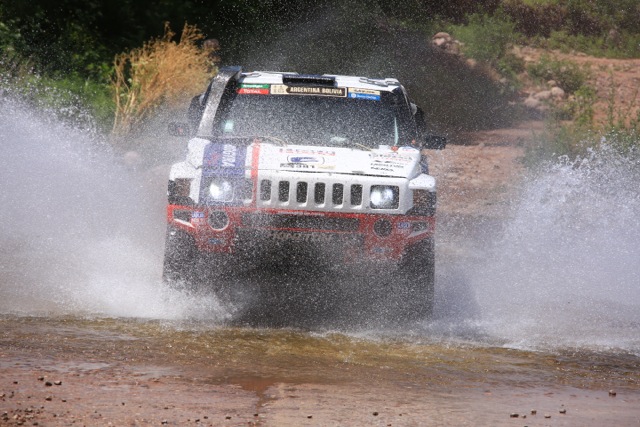 Finally it has come: the first real Dakar day for the crew of Buggyra Ultimate Dakar. For Tomas Ourednicek and Pavel Vaculik the stage was not smoothest, but the result of the special is promising: starting 95th, Tomas and Pavel clocked the 48th time.

The special of the day was originally one of the longest in this year’s Dakar: more than 500 kilometres, but due to the weather conditions it had to be shortened to 387 kilometres. The route wasn’t the most difficult, but very fast and dusty, so competitors required perfect concentration. Despite having some difficulties, Tomas Ourednicek was happy with his first Dakar kilometres as driver:

“In the transfer section we ran into a huge traffic jam so, like lots of other teams, we were late from the start of the special. Because of this we had no time to prepare for the start, not even to set to tyre pressure properly. We started 95th, so we drove in the dust of other cars all day long. I don’t know how many vehicles we overtook during the stage, but a lot… The track itself was very nice, fast and quite easy to drive, and Pavel made a great navigation. Our Hummer’s setup was perfect, but the engine is a bit hot so we have to be careful in the next stages.”

The third stage of the 2016 Dakar between Termas de Rio Hondo and San Salvador de Jujuy will be 663 km long, including a 314 km special, featuring some mountain tracks with breathtaking panorama but dangerous curves. Staying focused once again will be the key of the day...