The icing on Ourednicek’s Dakar cake

When we think about Dakar Rally, we usually recall the images of sunshine, heat, sand, or – after the past two editions – maybe rain and mud. Until now, ice was missing from the list of elements associated to the toughest motorsport event of the world, but Tomas Ourednicek is about to change this…

Brno’s Kometa hockey team is something of a legend in Czech Republic: the reigning champion holds 12 national league and three European Cup titles, making it one of the most successful teams in the country and also at European level.

Now HC Kometa goes to Dakar, at least symbolically: the well-known blue-white logo of the team appears on the Ford Ranger Dakar of South Racing Central Europe. “I am very proud to have the team’s logo on my car. Kometa is a real legend and we have teamed up with them to jointly increase the prestige of our city around the world. The Dakar Rally is an ideal opportunity for that,” says Tomas Ourednicek, who will be the only competitor from Brno in the upcoming Dakar and is still the most successful Czech in the car category.

“We are very glad to join Tomas Ourednicek and his team and look forward to introducing Kometa to the South American continent. Promoting sport as such is important to us and we also want to show that Brno’s sportsmen hold together. We wish all the best to Tomas and his team for this prestigious race,” says Lenka Plšková, marketing and sales director of HC Kometa Brno.

Dakar Rally is considered the most difficult and one of the most prestigious motorsport event in the world, with factory and semi-factory teams fighting for the top positions with drivers like former WC stars Sebastien Loeb, Mikko Hirvonen and Carlos Sainz, or Dakar legends Stephane Peterhansel and Nasser Al-Attiyah. For the 40th anniversary edition the organisers designed a route that for sure has a place among the hardest in the history of the rally. The race starts in Lima, the capital of Peru, on 6 January, followed by five gruelling desert stages right at the beginning. Those who are lucky enough to survive the dunes of Peru, then head to the high-altitude specials of Bolivia. The rest day will take place in La Paz on 12 January. After Bolivia, the crews enter Argentina for the final stages of the event before reaching the finish line in Cordoba on 20 January. 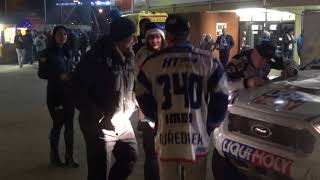