Although the second stage of Dakar Rally brought them some problems again, Tomas Ourednicek and David Kripal demonstrated an enormous fighting spirit throughout the stage. The crew of South Racing Central Europe managed to bring home their Ford Ranger Dakar after lots of “adventures” and although we don’t know their exact result, it’s almost sure that they managed to climb up in the overall classification.

Dakar Rally is one of the most prestigious motorsport events and is considered the ultimate human adventure, since it tests man and machine to the limit – and sometimes beyond. Two years ago, Tomas Ourednicek and that time co-driver Pavel Vaculik had only one really difficult day, but they managed to overcome the obstacles and brought their car home. This year Dakar Rally seems to be testing the determination and stamina of the crew of South Racing Central Europe, but they managed to cope with the all the difficulties of the gruelling second stage, a 278 km loop stage around Pisco, out of which 267 kilometres, mostly on sand,0 were against the clock. At the end of the day, they couldn’t even count how many time the situation seemed to be hopeless but with some creativity, persistence, and yes, physical strength they managed to fend off difficulties.

Tomas Ourednicek had a long story to tell when they finally arrived to the Pisco bivouac. “We spent 13 hours in the dunes… Again, at the start everything was amazing, we passed some 16 cars, we managed to go easily through a dune where about a dozen cars were stuck, but then on another, quite soft dune with got stuck, had to reverse and in that moment, we lost reverse gear. The car was facing uphill, we had to come down the dune but without reverse gear there was no chance for that. But we are clever Czech guys, and came up with the idea the turn the car using the lifting jack and its plate. Like that, centimetre by centimetre, David managed to turn the car and thus we were able the come down the dune.
A bit later suddenly the engine stopped. We were waiting for a while, helping some bikers, and then we managed to restart, but after passing the next dune it stopped again. We had to wait for the T4 truck of South Racing driven by Mathias Behringer and they tried to fix throttle body. We continued, but then the car stopped again. Then Mathias towed us, but he got a puncture, so we had to change wheel on the truck.
After that the car worked but the last part in the dunes in the total dark was really horrible. On the last big dune, it stopped again, so Mathias had to pull us again. Mathias and his crew were real heros and David did a great job with navigation, today we had all the waypoints properly validated. Now our mechanics have to change the gearbox and ECU also has to be checked, so it will be a long night, I hope that tomorrow we’ll be able to attack again.”

“I am very happy for Tomas, he did a great job, at the beginning of the special we had a great pace and starting from 80th position we passed 16-18 cars. We had some technical problems during the day, but it was a big adventure and real Dakar.
The navigation was horrible, very hard, and unfortunately the roadbook wasn’t always precise, but we are here and still in race, unlike many of the fellow competitors. Although we still couldn’t show our real speed and we’ll get a 3-hour penalty for exceeding the maximum time today, I think we proved that we are strong” David Kripal added.

Monday’s third stage will lead the competitors from Pisco to San Juan de Marcona, still on Peruvian soil. The total distance will be 502 km with 295 kilometres on a terrain quite similar to the previous specials. 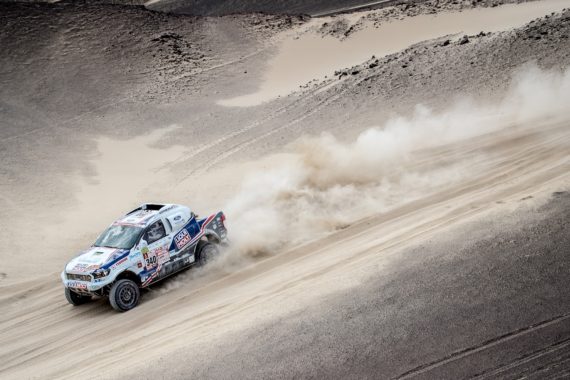