Ourednicek and Kripal warm up for marathon with good result

Stage 9 of the 42nd edition of Dakar Rally on Tuesday saw another great result by Ultimate Dakar’s Tomas Ourednicek and David Kripal. The Czech crew reached the finish line with their Ford Ranger with 26th time and improved their position overall to 36th after a smooth and successful day.

Today’s 886 km long stage between Wadi Al Dawasir and Haradh began early in the morning with an almost 500 km long transfer section, followed by 410 kilometres against the clock. In the dust of the trucks starting in front of them, Tomas and David focused on bringing their Ford Ranger Dakar home safely, without taking any unnecessary risks, as after the dramatic accident in Stage 6 their only goal can be now to finish the rally. They managed to build up a steady pace that in the end allowed them to score a decent stage result again and climb back up a few places also in the overall classification.

“The first part of the special stage was quite fast but also technical and sometimes tricky, perfect for the trucks because they did not need to care about the stones. In the dust it was impossible to overtake so we opted for a more cautious pace, especially after seeing two of the Toyotas crashed heavily. I was really satisfied with the engine, our mechanics did a great job, we have the power again. On the other hand, we had some problems with the brakes that gave us scary moments on the highway, but by now we know it was only the pedal so we can fix it easily. Altogether, we are happy to be here and now we are preparing the car for the next stages thoroughly as the next two days will be considered marathon stages with no assistance tomorrow evening,” Tomas said in the bivouac after the finish of Stage 9.

David also saw the day in a positive light: “We have finished another stage and the result is quite good again. The track and the navigation were nice and I enjoyed the day, although we had to drive very carefully in the first one hundred kilometres. After we managed to overtake the trucks the rest of the stage was really good for us.”

Wednesday’s Stage 10 is considered the first part of the so-called marathon, meaning that the crews can’t rely on their team in the evening. The total distance of the day between Haradh and Shubaytah will be 608 km, the timed section will be 534 km long. 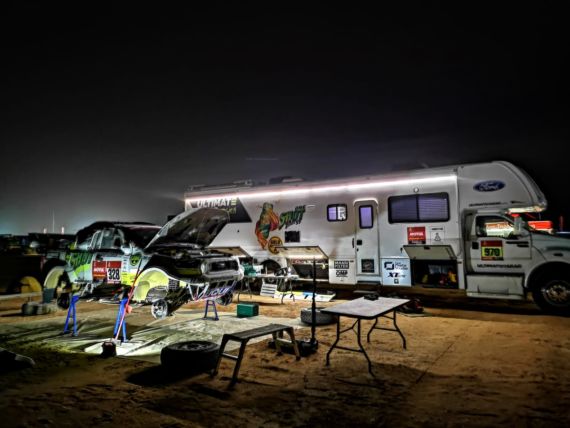