UltimateDakar starts the season in Poland

Although this weekend’s Baja Drawsko marks the debut of UltimateDakar, the crew members are everything but unknown in cross-country rallies: driver Tomas Ourednicek already has a 7th place from Dakar Rally under his belly as co-driver of Miroslav Zapletal, while Pavel Vaculik is one of the most experienced Czech navigators. 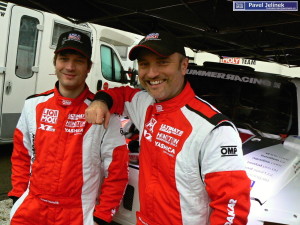 Their first was a real success story: 2nd place in the Central European Zone Championship and 4th place in the Hungarian Championship with a special prize for being the most constant crew. Ultimate Dakar Team already showed themselves to the fans at the Dakar Show in Sosnova, but they have to wait for the first race kilometres until Baja Drawsko, organised in Poland on 10-12 April.

Tomas and Pavel returns to the place where they started racing together one year ago. They don’t have the best memories from the opening round of the Central European Zone Championship: in 2014 their race was extremely short...

“Last year Baja Drawsko was my first ever race as driver. My motivation was high, maybe too high, because we broke the car after 650 metres. Of course, this year we want to improve this record seriously. The tracks are more or less similar to Baja Poland and those I loved, so i expect a good race, but also a tough battle as the field is really strong.”

Baja Drawsko will start this Friday afternoon with a 7.6 km Superspecial, followed by two 115 km specials on Saturday and two 62 km specials on Sunday, all near Drawsko Pomorskie, in the northwestern part of Poland.