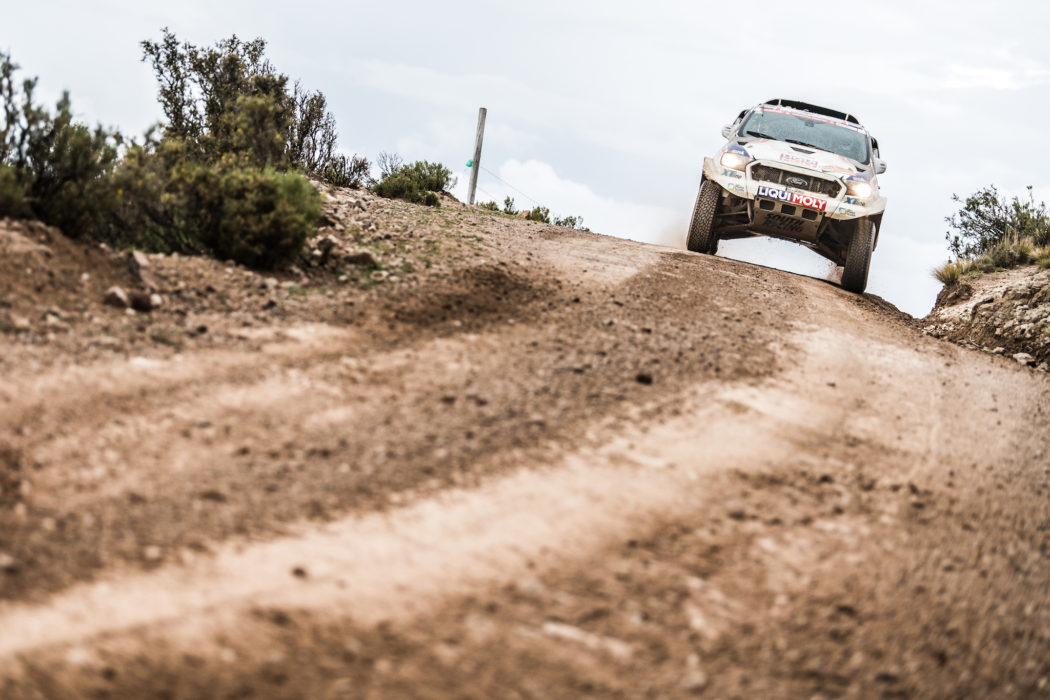 Ourednicek and Kripal back on track!

Although after their 16 hour long Stage 7 they started in Stage 8 directly, without sleeping or eating, or just taking a deep breath, Tomas Ourednicek and David Kripal finished the gruelling 498 km special between Uyuni and Tupiza in Bolivia with 36th time. In the overall classification, they climbed up to 40th position despite the four-hour penalty they received for Stage 7. The cancellation of Monday’s special meant a chance for getting ready for the last five stages of the race in every aspect.

When Tomas and David finally reached the bivouac (or better to say, what the rain left of that) after finishing Stage 8, they had plenty to say about their really marathon-like two days out in the Bolivian wilderness.

“When we started the marathon stage, everything looked good, until we reached a big river. We tried to cross but the engine kept losing power, so I used the clutch. Unlike many other competitors, we managed to cross, but after some kilometres we lost the clutch completely. This was the first of the many occasions during those 16 hours when I thought it was all over for us…

Fortunately, Mathias Behringer’s truck stopped, and helped us with changing the clutch. We went on but by then we lost a lot of time, we were last on the track and soon it became dark. We tried to follow the tracks of previous competitors, but it became more and more dangerous. Finally, we got lost and we got out of the car to go and find the way with torches.

David found a small house with two beds in it, and since it was marathon stage, we had our sleeping bags and Adventure menu in the car, we were well prepared to spend the night there, but we decided to try to find the way and go on. There was a point in the roadbook after that we knew there were only fast tracks, no tricky parts, like dunes. But there again was a big river and we didn’t know what to expect so before crossing it, we threw a stone in it to get an idea about its depth.

We went on very carefully, trying to avoid the big mud puddles since the truck of Mathias was 100 km in front of us, but there were many tracks and it was difficult to find the right one. Only three kilometres before the finish we missed the correct path and got stuck in the deep mud so badly that it was impossible to get out. We tried everything, even pulling small trees by hand and put it under the wheels, but nothing helped. The organisers contacted us and offered to rescue us – but in that case, we would have been out. They also said that we had to reach the bivouac by 8:40 or we would be excluded. We asked for some time before answering, and discussed the situation.

David said that this mud puddle simply can’t be the end of our Dakar. So, we took our raincoats, torches and satellite phone, and went out to find help. We saw some light that we thought was a village. We walked three kilometres at 3,800 metres altitude, in pitch-dark, until we approached the village and noticed that in the first house the lights were on. But before we could knock on the door to ask for help, we heard a truck coming.

It was the organisers truck, so we stopped it and explained the situation to the driver. We asked if he could help us in a way that we wouldn’t get excluded and he said yes. It took him about five minutes to get us out of the trap... We reached the bivouac in the morning, at about 8 o’clock, and shortly after we had to start in Stage 8. David hardly had time to make the most important things on roadbook.

For the special, we decided to go very carefully, avoiding any mistakes. We sacrificed speed for safety, but anyway, we reached the finish of the marathon stage, we are still in race, and this is the most important,”_ Tomas Ourednicek summarised their experiences.

“It was amazing! It was very hard to race during the night because then it was very hard to find the right way. For Stage 8, I had no time to prepare the roadbook at all, but in the end, everything worked fine. These two days were very long and very exhausting, but I am very happy to be able to continue,” David Kripal smiled.

Since then, Tomas and David have arrived in Argentina, where the race resumes on Tuesday between Salta and Belén. Stage 10 will be 795 km long with a 372 km special, offering all the ‘delicacies’ of the region: starting with dunes and ending with river crossings and tricky navigation.