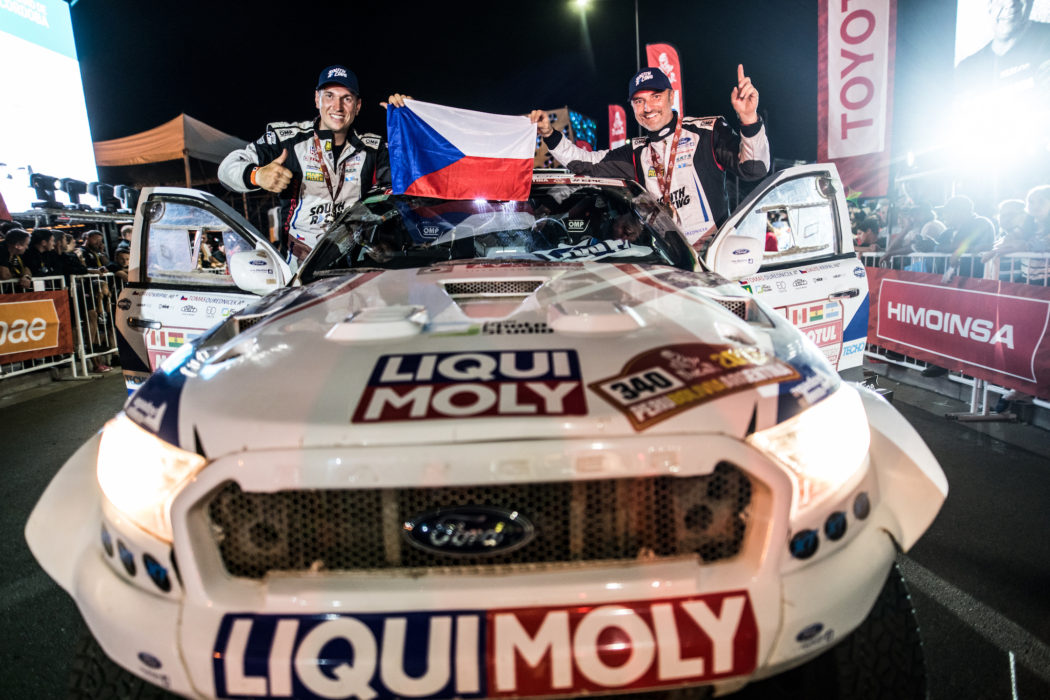 Ourednicek and Kripal: “We had enough adventures for ten Dakars…”

Tomas Ourednicek and David Kripal successfully finished the 40th edition of Dakar Rally despite they had to cope with various types of difficulties. The driver from Brno, who finished 7th in 2009, says the key of being able to continue in every situation was besides persistence creativity.

What’s said is said, what’s done is done. It’s easy to say “I never give up”, but it’s something completely different to stand up and try to go on when everything seems to be working against us. For Tomas and David the odyssey started right at the beginning of the race: due to a strange engine problem, the car kept losing power and stopping unexpectedly, and this is a recipe for catastrophe in the dunes… After the second stage, the chance of a good overall result was already gone, but Tomas and David were determined to get the Ranger to the finish line.

It happened that they got stuck on a dune with no reverse gear and they had to turn the car centimetre by centimetre, using the hydraulic jack, in another stage the team had to change seven tyres in only some minutes, or had to “invent” a tool to get rid of mist on the windscreen – just to mention a few of the stories.

The climax of their race came during the seventh race day, in the first part of the so called ‘marathon stage’, when due to a technical problem early in the special, they had to find the way in pitch-dark, as last car on the track. They got last in the middle of the night, but although they found a small house where they could spend the night, they decided to go on. They reached the finish only in the morning, minutes before they had to start in the next special, but without missing one single Waypoint, and completed Stage 8 without further problems. Even Dakar Rally director Etienne Lavigne was astonished when they recalled those 16 hours to him later.

The last few days of the rally became a bit easier for the crew of South Racing Central Europe, since the engineers finally found the reason of the strange engine problem: a lambda sensor. After that, Tomas and David finally were able to switch from survival mode to race mode, and enjoyed some real racing. Throughout the two weeks, and despite all ‘adventures’ the crew tried to help other competitors when they could and kept improving their overall result gradually from 74th place to 33rd place in the final classification despite more than 7 hours of penalty.

Tomas Ourednicek gave a summary of their experience: “This Dakar was extremely difficult. It would have been so without any problems, even cars’ winner Carlos Sainz called it the hardest ever, but for us the difficulties tripled. When you are in the front, Dakar can be pretty smooth, but once you have to start from the back on just one day, for any reason, you are doomed. In Stage 2, we started from 99th position, and if you start among the last cars, you experience worse conditions in the track, trucks in front of you, and most importantly you are likely to drive the last part of the stage in the dark, so you have to reduce speed, and here you are, having a bad starting position for the next day, too… And we were in this spiral for two thirds of the race! So even if the overall position is really not what we expected, and we couldn’t even show our real speed in the specials, I am very proud and happy to have finished this Dakar. More than half of the competitors were out, including many of the top contenders, I think this says a lot. I am also very proud of David, for whom it was the first participation, and he did an excellent job with navigation throughout the race. We had adventures enough even for ten Dakars, but this was a big experience!”

David Kripal talked about the navigational part: “It’s a fantastic feeling to finish the Dakar! The navigation was often quite tricky, but most of the time the roadbooks were very good, although there were also some confusing points. The technical problems were really frustrating, and they made navigation also more difficult, but in the last few stages everything was great. The dunes in Peru and Argentina are very different from those we raced on in Morocco, so that was a new experience and a big challenge. Besides persistence, we often needed some creativity and some luck to be able to continue, but we managed to reach the finish line, and that is the most important.”

As for the racing calendar for 2018, according to Tomas it is too early to talk about that. “Of course, we have some plans, but before making them public, first we need to sit down and discuss the lessons we’ve learnt from this Dakar and make the necessary adjustments.”