Like last year, Baja Drawsko in Poland didn’t bring too much luck for Tomas OUrednicek and Pavel Vaculik: after 40 km they got lost because of broken Tripmaster, then a technical problem prevented the crew from starting on afternoon’s special.

It seems like Baja Drawsko can’t be easy for the crew of UltimateDakar. Last year this was the very first race together for Tomas Ourednicek and Pavel Vaculik and the only one in the season that they couldn’t finish. This year everything ran well until about the 40 km of the first long special, where the crew went “gardening” because of broken Tripmaster. Later they got stuck but finally managed to bring the car home.


The bigger problem came after the service, when the team experienced oil leakage that turned out to come from the cooling oil tank of the steering. In this condition the car had no chance to be able to finish the gruelling 115 km track on the infamed “Poligon”, near Drawsko Pomorskie, so Ultimate Dakar crew had to miss the special in order to have the chance to finish the race on Sunday.


“It was not the best day for us… Everything ran well until about km 40, but then we had some problems with the Tripmaster, we didn’t see the kilometres, so we got lost. As we tried to find our way, we found ourselves on a track in the opposite direction. Later we got stuck in the deep sand – it was like the Dakar! Finally we managed to reach the service park, and after the service we saw some oil leakage. It turned out to be the tank of the steering oil, so we had no other choice but to miss afternoon’s special. Tomorrow we rejoin the race but unfortunately we’ll have no chance to score points in Central European Zone Championship,” Tomas Ourednicek said.


On Sunday, Baja Drawsko, opening round of the Central European Zone Championship, ends with two more specials of 62 km near Drawsko Pomorskie in the northwestern part of Poland. 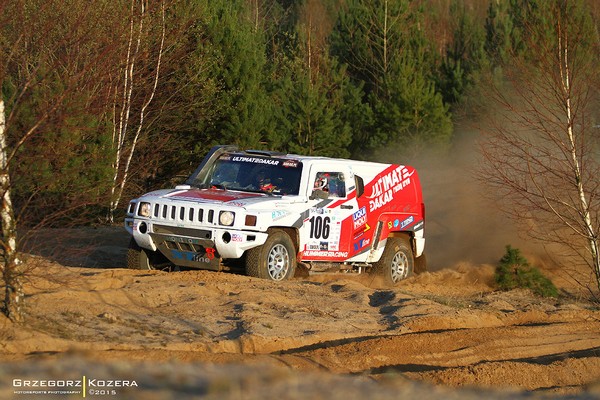